String Theory: I Ching Hexagrams and the Six-Stringed Guitar

If you are interested in studying the correlation between esoteric philosophy and music theory, you need to look into Pat Martino. His book The Nature of Guitar outlines a number of concepts that I had never read anywhere before. One of his most interesting concepts addresses the application of the I Ching’s hexagrams to the six stringed guitar.

The 64 Hexagrams of the I Ching 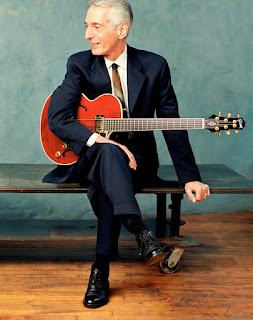 Tarot is among the most popular forms of chance-operation divination in the Western mystery tradition. The Chinese use the I Ching in a similar way to the tarot, asking a question and casting the hexagrams in order to gain deeper insight into their situation. If you have never worked with it before, you can practice with a digital form of the oracle (here) and use Jame DeKorne’s website to get access to many of the best translations (here). Both of these resources are free.

The word hexagram comes from the root words hex (six) and gramma (letter), a reference to the fact that each hexagram is composed of six lines. Each line is binary, meaning it can only appear in two ways; solid or broken. Depending on how the six lines stack up on each other, one of sixty-four possible combinations will emerge. During consultation, the querent must cast two hexagrams to determine the changing lines, from which a great deal of additional information can be derived. 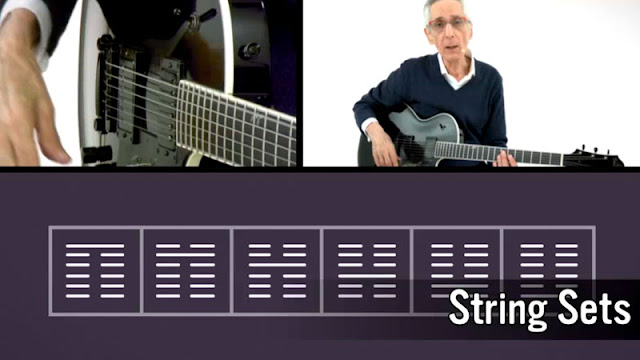 Martino lays out a theory of String Sets that correlate to each of the hexagrams. The solid lines represent the string(s) that are played while the broken lines represent strings that are kept silent. In the image above, six hexagrams are shown, each with one solid line representing one of the six guitar strings, ranging from high to low. In the image below, we see two-string sets with octaves highlighted in blue. A variety of other possible string sets are also represented here. Check out his course Nature of Guitar to better understand how these are incorporated into his curriculum.

Five years ago I published an article through Sync Book Press called Hermes and the Tortoise, detailing the relationship between Western esoteric music and the I Ching. It is said that the I Ching was discovered by Emperor fu-xi as he contemplated the shell of a tortoise. One of the ancient masterpieces of Greek literature, the Homeric epics, tells the story of Hermes discovering a mountain turtle shell and attaching strings to it to produce an instrument called the lyre. He likely chose the turtle shell because of its resonant qualities. The lyre is a close cousin of the Greek kitara, from which the modern word guitar originates.

Most lyres are designed with seven strings because the Ancient Greeks believed each note was in resonance with the seven celestial bodies. In the Western magickal tradition, the seven planets are mapped onto a shape that, curiously enough, is also called a hexagram. It’s a six-pointed star with one planet at each point and the root note of the scale at the center, representing the seven-note musical scale ABCDEFG. 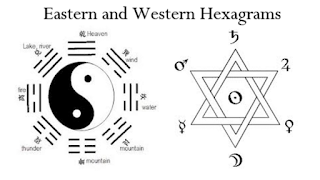 Just as the early Greek philosophers had attempted to map the secrets of the cosmos through models of planetary music, it appears that modern scientists at Fermi Labs and Cern are traveling along a similar course. In an effort to resolve Einstein’s theory of relativity with quantum mechanics, a theory called String Theory was put forward, describing a level of reality existing at a deeper level than atoms and quarks. I was shocked to discover that the whole notion of “String Theory” was originally based on the musical vibration of strings.

The following short clips were lifted from a Discovery Channel documentary on String Theory. Each excerpt addresses the musical aspect of their cosmology. Here again the hexagram principle shows up as a six-dimensional model of the string. The different vibrational frequency of each string determines a particle’s mass and charge.

The Psychology of Color

Bloc Party and ‘The Love Within’